Penny For Your Thoughts

Welcome to the home of the Islands soap ‘Penny For Your Thoughts’. At Vectis Radio, we like to think big, size is irrelevent if you have big ideas, that’s why we’re proud to have our very own soap opera set on the Island, with Island residents featuring. Have a listen, maybe you might even want to join in. You can sign up at the bottom of the page. 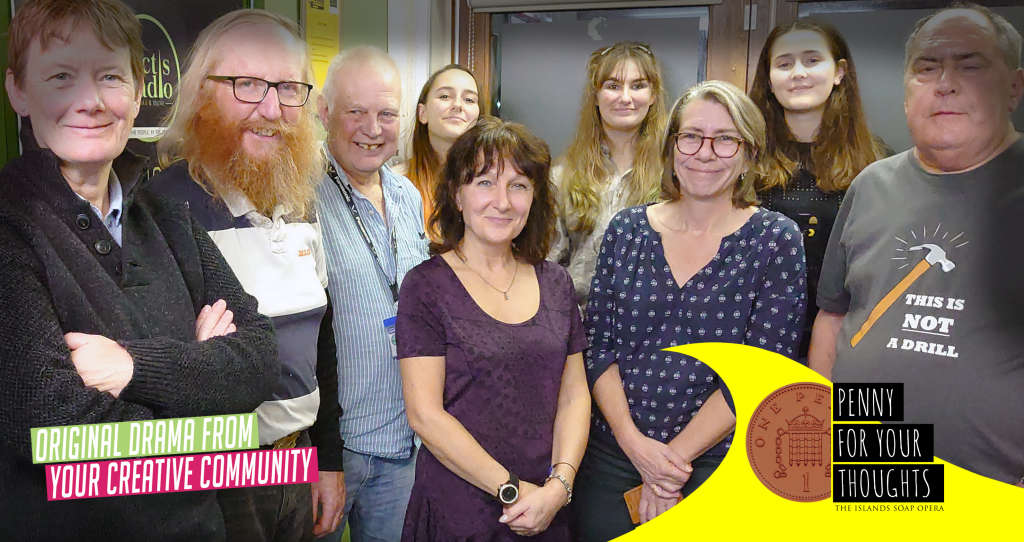 Penny Taylor (played by Marion Hartley)
Penny is a shop assistant at Pattersons. She has a lodger called Cathy and enjoys socialising with her friends.

Cathy Westwood (played by Diana Gates)
Cathy is Penny’s Lodger. She works for the IOW Council and is straight talking and rather loopy.

Michael Roseberry (played by Hobbit)
Michael is the manager of Pattersons. He is a sensible and kind hearted chap who has a soft spot for Penny

Jim Mason (played by Brian Curtis)
Jim is a shop assistant at Pattersons and is Michael’s good friend. He is a busy body with an ultra ego. He has an open relationship with his partner Les.

Mike Benford (played by Kevin Wilson)
Mike used to be assistant manager of Pattersons. He is currently going out with Penny. He has a daughter called Jess from his wife Jill. He seems quite a sincere chap but has in the past been associated with the Ryan’s. He was accused of a hit & run incident but found not guilty.

Connie Benford (played by Victoria Thorneton-Field)
Connie is a very down to earth, friendly person. She is quite wealthy from her previous employment. She works at Garden Isle Café with Helen. She likes most people apart from Mike’s ex wife Jill and she finds Cathy rather annoying.

Jill Benford (played by Rachael Bunker)
Jill is Mike’s ex wife. She is not a very happy lady and blames Mike for ruining her life. She has no sense of humour and likes it when things go wrong for other people. She works at a pub called The Fox.

Vince Mansfield (played by Dave Ballard)
Vince works as an engineer in Italy and is away a lot of the time. He loves his daughter Amy very much and wants her to do well in life. He is more of a social chap than his wife Helen realises and enjoys his time in Italy. He tends to tolerate his wife.

Helen Mansfield (played by Pam Middleton)
Helen owns and manages Garden Isle Café. She likes to have control of situations and of Amy. Helen did not have a happy childhood and this reflects on her outlook on life. She suspects her husband Vince is having an affair but isn’t too bothered as long as he doesn’t leave her.

Amy Mansfield (played by Leyla Baxman)
Amy is a charming, friendly young lady who wants to have good career in nursing. To do this she knows she needs to get away from her controlling mother. She’s always wished that her dad was home more. Amy likes to go out with her friends Petra and Alice.

Petra Rushington (played by Rhi Kinnair)
Petra is friends with Amy and Alice and is possibly the most content of the three. She now works at Garden Isle Café and would love to meet somebody, settle down and start a family. She has no intention of leaving the Island.

Alice Davenport (played by Nakita Wareham)
Alice comes from a very wealthy, loving and supportive family. She works at The Fox and doesn’t really know what she wants to do with her life. She doesn’t always listen properly as her mind is often on other things.

Pete Jackson (played by Mark Mordey
Pete is a friendly, social chap who wants an easy life. His glass is always half full. He has recently returned to the Island to become the new owner of The Fox.

Tina Long (played by Nika Bolinski)
Tina works at Pattersons and is not popular. She likes to create problems and cannot be trusted. She keeps her private life to herself.

Nick Patterson (played by Ken Goatham)
Nick is the owner of Pattersons, who now lives in Spain with his wife Danielle. He visits the Island occasionally to check that everything is OK. He is wealthy, well educated and a good-natured chap.

Are you a talented actor? Would you like to be part of the Isle of Wight’s community soap opera? To register an interest, please fill out the form below and as opportunities emerge, you could well be the next manager of Pattersons or Penny’s new love interest.